It’s been nearly two months since my last day at Google, so I guess I should finally make use of this newsletter :)

I wrote a paper which was published on April 1st as part of SIGBOVIK 2019: “93% of Paint Splatters are Valid Perl Programs”. In this paper, I answer a long-standing open problem in the programming languages community: is it possible to smear paint on the wall without creating valid Perl?

(Long-standing since February 13, 2019, when a Twitter conversation between Adrienne Porter Felt & Jake Archibald posed the question.)

To answer this question, I downloaded 100 images of paint splatters from Pinterest, ran the open-source Tesseract OCR engine to turn each into a text string, and then sent that text to the Perl interpreter to see whether that text successfully parsed as Perl. It turns out that 93 of the 100 paint splatters do parse as valid Perl, but since 7% do not, I conclude that it is possible to smear paint on a wall without creating valid Perl.

You might suspect there is some chicanery going on with this result. You’d be correct, but… honestly there’s not that much chicanery going on. You’ll have to read the paper for details… and for my attempts at academic humor. :)

There’s also some supporting material on this website, including a gallery of all 100 images and their associated valid Perl code. Here’s a screenshot of some of them. (Did you know that the string lerzfijglpFiji-j evaluates to the number 0 in Perl?) 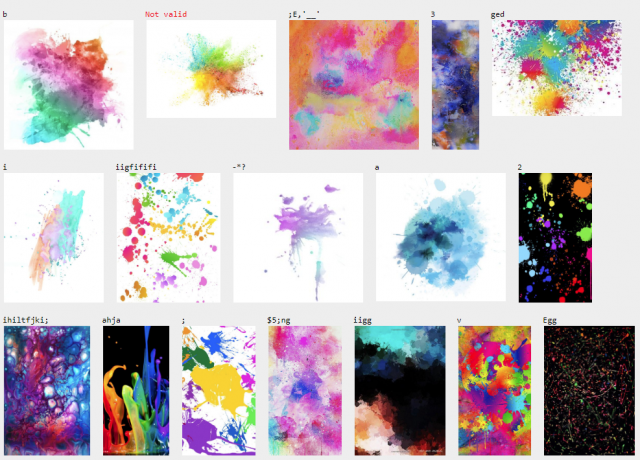 As it turns out, the publication date of my paper was exactly 10-years-minus-a-day since my Ph.D. thesis defense. I’d planned on travelling back to Carnegie Mellon to give this talk live at SIGBOVIK 2019, but unfortunately came down with a nasty cold-and-cough so I had to cancel my trip. :( Perhaps I can give a belated talk at next year’s conference.

For more light-hearted and vaguely CS-shaped research papers, check out the rest of the SIGBOVIK 2019 proceedings. I particularly enjoyed “Elo World, a framework for benchmarking weak chess engines” by tom7 (“The computer players include some traditional chess engines, but also many algorithms chosen for their simplicity, as well as some designed to be competitively bad”.)

Some other random things that I’ve been up to in the last month-and-a-half:

Thanks for reading! Hopefully the next update will come sooner than 2 months and thus be a bit shorter than this one ended up being :)